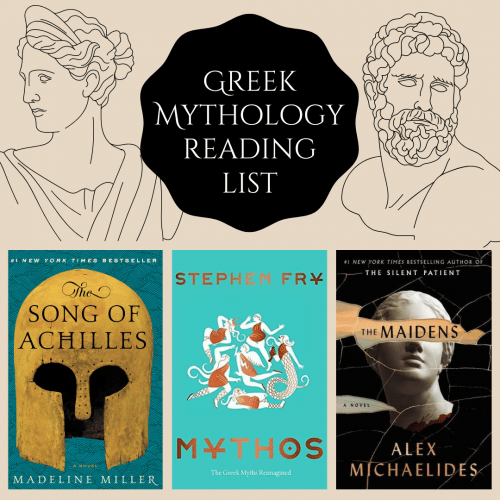 The Song of Achilles by Madeline Miller  Achilles, “the best of all the Greeks,” son of the cruel sea goddess Thetis and the legendary king Peleus, is strong, swift, and beautiful, irresistible to all who meet him. Patroclus is an awkward young prince, exiled from his homeland after an act of shocking violence. Brought together by chance, they forge an inseparable bond, despite risking the gods’ wrath. Request today!

Mythos: the Greek Myths Reimagined by Stephen Fry  A modern collection of Greek myths, stylishly retold by legendary writer, actor, and comedian Stephen Fry. Fry transforms the adventures of Zeus and the Olympians into emotionally resonant and deeply funny stories, without losing any of their original wonder. Request today!

The Maidens by Alex Michaelides  Edward Fosca is a murderer. Of this Mariana is certain. But Fosca is untouchable. A handsome and charismatic Greek Tragedy professor at Cambridge University, Fosca is adored by staff and students alike—particularly by the members of a secret society of female students known as The Maidens. Request today!