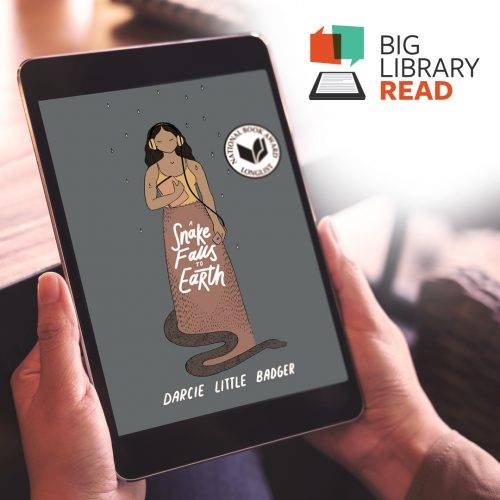 All ages can experience Big Library Read, the world’s largest digital book club, with a Newbery Award-winning young adult novel. From November 2-16, booklovers can join thousands of others around the globe by borrowing Darcie Little Badger’s indigenous fantasy novel, A Snake Falls to Earth, from their digital library. The ebook and audiobook are available for free with NO WAITLISTS OR HOLDS on the Libby app. Readers can then discuss online at https://biglibraryread.com/join-the-discussion/.

A Snake Falls to Earth tells the story of Nina, a Lipan Apache girl who always felt there was something more out there. She still believes in the old stories. Meanwhile, Oli is a cottonmouth kid from the land of spirits and monsters. Like all cottonmouths, he’s been cast from home. He’s found a new one on the banks of the bottomless lake. Nina and Oli have no idea the other exists. But a catastrophic event on Earth, and a strange sickness that befalls Oli’s best friend, will drive their worlds together in ways they haven’t been in centuries. And there are some who will kill to keep them apart.

Big Library Read is an international reading program that connects millions of readers around the world with an ebook through public libraries. A Snake Falls to Earth is the 29th selection of this program which began in 2013 and takes place three times per year.

Learn more about the Libby App here or visit a local library branch to get started.