Whitman County Library is commemorating the 60th anniversary of the construction of its Colfax Branch by seeking recognition from the National Register of Historic Places for its unique Expressionist architecture.

To assist in the application process, the library is asking community members to share their memories of the building or ways the library has impacted their lives and the community.  Friends of the Library volunteer Sue Hallett is heading up the research and encourages interested parties to contact her at friends@whitco.lib.wa.us

The building, a Main Street fixture in downtown Colfax, was designed by noted architect Warren C. Heylman of Spokane, who was also known for his work on the Spokane Parkade and the Spokane Regional Health District building. Sceva Construction Company completed the new library in the fall of 1960, after finishing Colfax High School earlier in the year.

The library project cost about $129,000, which some local residents felt was quite expensive.  It was funded with $20,000 in library reserve funds, community donations, and an $85,000 bond issue purchased by the Old National Bank at 4% and paid off within six years through property tax revenues.

The building’s design drew both positive and negative reviews as it was radically different from the red brick construction of most of the other downtown buildings.  Largely constructed of concrete with a white stucco and natural stone exterior, a front wall composed entirely of windows and a rounded, sculptural profile, its open concept interior was flooded with natural light.

The building was constructed with an unfinished basement, completed in 1966, and with structural support built in for a mezzanine office space, which was built in 1985.  A much-needed disability access remodel including an elevator in 2010 also provided for expanded computer space and Hayden’s Corner, a children’s section with a free-standing artificial tree creating the ambience of a rain forest. 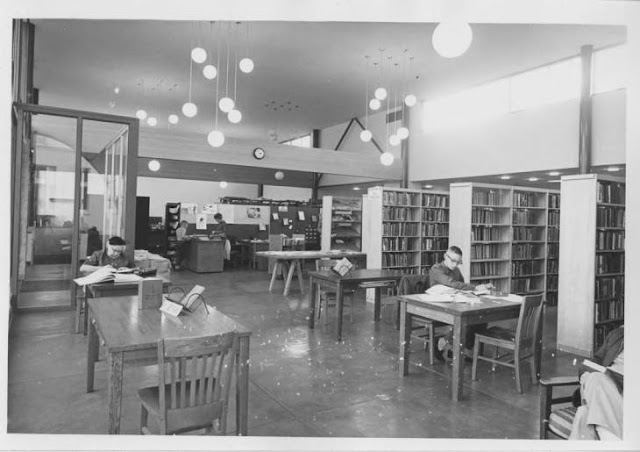 During each revision over the sixty years of the library building’s existence, library leaders were careful to retain the integrity of Warren C. Heylman’s original architectural design.  In November 2018 Mr. Heylman, then 95, received an award from the Spokane Preservation Advocates organization for significant contributions to the cultural and historic heritage of Spokane County.  At that time the Spokesman-Review interviewed his daughter, Ann Martin AIA, now the principal partner of the Heylman Martin architectural firm.  She said that the Whitman County Library was her favorite among her father’s many projects.  “The library board has respected that building and altered it very little since it was built.  I just love that building,” she said.  “I think he does, too.”

In Colfax, the Post Office and the Perkins House are among buildings listed on the National Register of Historic Places.  In preparing the library’s nomination, staff and volunteers believe recollections from local residents about their experiences with the big white building on the corner of Spring and Main Streets will add richness and texture.


Sixty years ago our local community’s vision led to the construction of a building to house their dreams for the future.  In 1960, when it was time to move the books from the old rented location into the new library building, volunteers stood side by side along the sidewalk and passed the books along by hand.  Support for the library has always come from within its community.  Generations of children have benefited from all of those helping hands.  So has everyone else who has ever entered its doors.

Please contact Sue Hallett, Friends of Whitman County Library President at 509-397-4074 to share any stories you may have.