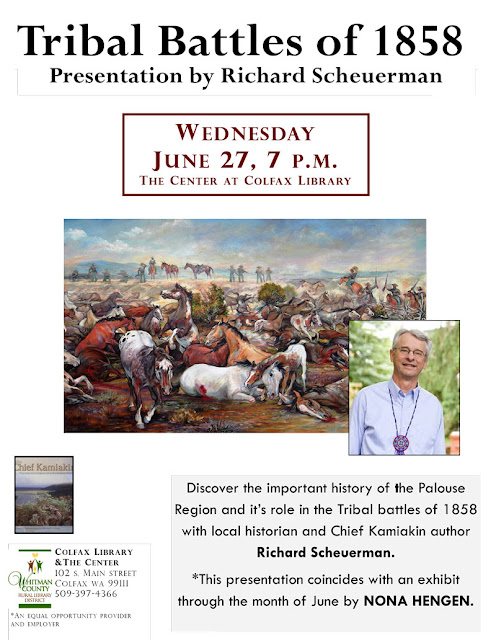 Richard Scheuerman, acclaimed author and historian, comes to The Center at Colfax Library on Wednesday, June 27 at 7 p.m. in a presentation about the history of Native American peoples on the Palouse including the infamous Tribal Battles of 1858. This presentation is provided in cooperation with an exhibit titled the “Indian Wars of 1858” by Nona Hengen. That exhibit runs through June in The Center.

Born and raised on a farm between Endicott and St. John, Scheuerman has long studied local history and tribes. His book Finding Chief Kamiakin is based on extensive interviews with Columbia Plateau tribal elders and the military campaigns of Edward Steptoe and George Wright.

Scheuerman has twice been named a Washington Governor’s Author and was recipient of the 2000 State Excellence in Education Award. After a forty-year career in education, he has recently completed a three-volume work on agrarian themes in art and literature in his retirement.

Nona Hengen shares an exhibit comprised of two over-sized paintings titled the “The Battle of Steptoe” and “Horse Camp Slaughter”, along with 15 colorful prints from her Indian War series. These prints show in graphic detail the brutality of the wars while explaining the history. The films, The Spokane Tribal Battles of 1858 produced by the Spokane Tribe and Painting in the Details: Indian Wars of 1858 by Nona Hengen are also showing as a part of the exhibit.

Nona was inspired to paint this series more than 30 years ago when she was presenting a class about cultural conflicts. It was from her study of Manifest Destiny and the resulting Steptoe/Wright Campaign of 1858, that the large, colorful paintings were born.

Hengen is an artist, writer, and teacher. Her interpretive canvases feature eastern Washington subject and scenery. Nona’s written works have been featured in “Wheat Life” magazine and she has self-published 16 titles under “Palouse Press.” Hengen, was born and raised in the Spangle.