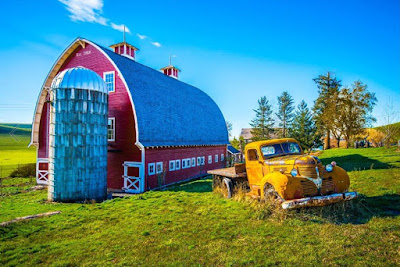 Postcards of beautiful local barns for sale to support Whitman County Library – $4 each!

Photographer George Bedirian shares a breathtaking collection of black and white images, while Ken Carper contrasts with beautiful color photos. As a bonus, Steve Van Vleet will exhibit barn images that have been included in the popular Barns of Whitman County calendars.

George Bedirian chose the images for this exhibit from photos he took during the 1980s. George was enthralled by the beauty of the Palouse and made it his mission to document not just the landscapes, but also the built environment, which included towns, grain elevators, and barns.

Of the 18 barns George will include in the show, at least half have disappeared.  Another is on the verge of collapsing.  Seven of the images have appeared in one or both editions of Palouse Country while eight are being shown for the first time.

Most of Ken Carper’s photographs feature the unique landscapes found in the Palouse, a place he sees as one of the world’s most beautiful environments. For this exhibit, Ken has selected images of some of his favorite agricultural structures because they have been integral to the region’s economy and history. Unfortunately, many of these historic agricultural buildings are being lost each year to deterioration and are being replaced by pre-engineered metal and concrete buildings. It is costly to preserve our heritage so Ken hopes the images that he and George present for this exhibit will contribute to the legacy of Palouse memories. Ken’s photography website is:  kencarperphotos.com. 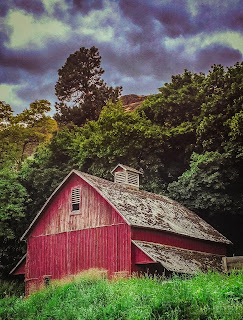 Steve Van Vleet is the WSU / Whitman County Extension Educator in Agriculture & Natural Resources. Steve has photographed most of the county’s barns while traveling around the county for work. Each year, he compiles and donates the Barns of Whitman County calendar that has raised thousands of dollars for Whitman County Library programs and services.