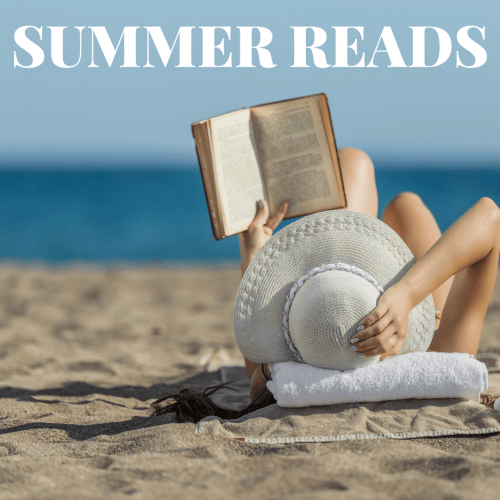 Into the Water by Paula Hawkins  A single mother turns up dead at the bottom of the river that runs through town. Earlier in the summer, a vulnerable teenage girl met the same fate. They are not the first women lost to these dark waters, but their deaths disturb the river and its history, dredging up secrets long submerged. Beware a calm surface—you never know what lies beneath. Request today!

Death on the Nile by Agatha Christie  Linnet Ridgeway has led a charmed life. Blessed with beauty, enormous wealth and a devoted husband, she has everything anyone could wish for. But as the happy couple set out on an idyllic honeymoon cruise on the Nile, storm clouds are gathering… Also, check out the 2022 film! Request today!

Beach Read by Emily Henry  A romance writer who no longer believes in love and a literary writer stuck in a rut engage in a summer-long challenge that may just upend everything they believe about happily ever afters. Beginning one hazy evening when they strike a deal designed to force them out of their creative ruts. Everyone will finish a book and no one will fall in love. Really.  Request today!

The Boys in the Boat: Nine Americans and their epic quest for gold at the 1936 Olympics by Daniel Brown  This book traces the story of an American rowing team from the University of Washington that defeated elite rivals at Hitler’s 1936 Berlin Olympics, sharing the experiences of their enigmatic coach, a visionary boat builder, and a homeless teen rower. Request today!

The Beach House by James Patterson  Jack Mullen is a driven student of the law. His brother Peter is a servant of the rich, parking the cars of the Hamptons’ elite—and perhaps satisfying their more intimate needs as well. Then Peter’s body is found on the beach. Jack knows the drowning was no accident, but someone’s unlimited power and money have bought the cops, the judges, the system. Now Jack is learning a lesson in justice he never got in law school, and his astonishing plan to beat the billionaires will have you reeling—and cheering—to the very last page. Request today!

Where the Crawdads Sing by Delia Owens  For years, rumors of the “Marsh Girl” have haunted Barkley Cove, a quiet town on the North Carolina coast. She’s barefoot and wild; unfit for polite society. So in late 1969, when handsome Chase Andrews is found dead, the locals immediately suspect Kya Clark. But Kya is not what they say. Abandoned at age ten, she has survived on her own in the marsh that she calls home. A born naturalist with just one day of school, she takes life lessons from the land, learning from the false signals of fireflies the real way of this world.  Request today!

The Last Kingdom by Bernard Cornwell  In the middle years of the 9th century, the fierce Danes stormed onto British soil, hungry for spoils and conquest. Kingdom after kingdom fell to the ruthless invaders until only one realm remained. Suddenly the fate of all England–and the course of history–depended upon one man, one king. This book series, The Saxon Stories, also sparked a television series entitled “The Last Kingdom. Request today!

The Devil and the Dark Water by Stuart Turton  Murder on the high seas. A remarkable detective duo. A demon who may or may not exist. It’s 1634 and Samuel Pipps, the world’s greatest detective, is being transported to Amsterdam to be executed for a crime he may, or may not, have committed. Traveling with him is his loyal bodyguard, Arent Hayes, who is determined to prove his friend innocent. But no sooner are they out to sea than devilry begins to blight the voyage. A twice-dead leper stalks the decks. Strange symbols appear on the sails. And then three passengers are marked for death, including Samuel. With Pipps imprisoned, only Arent can solve a mystery that connects every passenger. A mystery that stretches back into their past and now threatens to sink the ship, killing everybody on board. Request today!

A Hope More Powerful Than the Sea: One refugee’s incredible story of love, loss, and survival by Fleming, Melissa  This is the true story of a young Syrian refugee’s attempt to reach Sweden, focusing on her ordeal in icy waters after the dilapidated fishing vessel in which she was traveling–along with 500 others–sinks. Request today!

One Italian Summer by Rebecca Serle  Heartwarming, heartbreaking, and hard to put down, this modern classic is a moving and unforgettable exploration of the powerful bond between mother and daughter set on the breathtaking Amalfi Coast.  Request today!

Norse Mythology by Neil Gaiman  Stories that began amonst the fjords of Scandavia and icy Baltic Sea, Neil Gaiman inspires in this collection of ancient mythology and fantastical realms. Gaiman fashioning of the primeval Norse myths into a novel, which begins with the genesis of the legendary nine worlds, delves into the exploits of the deities, dwarves, and giants, and culminates in Ragnarok, the twilight of the gods and the rebirth of a new time and people. Request today!

That Summer by Jennifer Weiner  Set in Cape Cod, While trying to pinpoint the root of her dissatisfaction with her life, Daisy Shoemaker begins receiving misdirected emails meant for another woman and starts living vicariously through her until she discovers that their connection was not completely accidental. Request today!

Circe by Madeline Miller  Pulling from the rich tapestry of Greek mythology, this novel follows Circe, the banished witch daughter of Helios, as she hones her powers and interacts with famous mythological beings before a conflict with one of the most vengeful Olympians forces her to choose between the worlds of the gods and mortals. Enjoy your time with Circe on a beautiful, but deserted island. Request today!

The Pearl by John Steinbeck  For the diver Kino, finding a magnificent pearl means the promise of better life for his impoverished family. His dream blinds him to the greed and suspicions the pearl arouses in him and his neighbors, and even his loving wife cannot temper his obsession or stem the events leading to tragedy. Kino and his wife illustrate the fall from innocence of people who believe that wealth erases all problems. Request today!

Unbroken: A World War II Story of Survival, Resilience and Redemption by Laura Hillenbrand  On a May afternoon in 1943, an Army Air Forces bomber crashed into the Pacific Ocean and disappeared, leaving only a spray of debris and a slick of oil, gasoline, and blood. Then, on the ocean surface, a face appeared–Lt. Louis Zamperini. Captured by the Japanese and driven to the limits of endurance, Zamperini would answer desperation with ingenuity; suffering with hope, resolve, and humor. Request today!

Big Little Lies by Liane Moriarty  Set on the Pirriwee Peninsula in Australia, an affluent beachside community, this story follows three mothers, each at a crossroads. Their potential involvement in a riot at a school trivia night leaves one parent dead in what appears to be a tragic accident, but which evidence shows might have been premeditated. This novel was the inspiration for the television version of Big Little Lies, which is set in sunny Monterey, California amongst the sand and surf. Request today!

The Guernsey Literary and Potato Peel Pie Society by Mary Ann Shaffer & Annie Barrows  Focused on the Channel Island of Guernsey, this stunning novel is set in 1946. As London emerges from the shadow of World War II, author Juliet Ashton is having a terrible time finding inspiration for her next book. Then she receives a letter from Guernsey Island, and learns of a unique book club formed on the spur of the moment as an alibi to protect its members from arrest by the occupying Germans during the war. Captivated, she sets sail for Guernsey, and what she finds there will change her life forever. Request today!

The Count of Monte Cristo by Alexander Dumas  Anchors away for this classic tale of revenge and adventure! The young sailor, Dantes, is fallaciously charged with treason and loses his fiancé, his dreams, and his life when he is locked up for thirteen years on the island prison of Chateau d’If. Mentored by another prisoner, Dantes finally escapes the prison, reinvents himself as the Count of Monte Cristo and begins to exact his revenge on the people who set him up. Request today!

The Perfect Couple by Elin Hilderbrand  It’s Nantucket wedding season, also known as summer-the sight of a bride racing down Main Street is as common as the sun setting at Madaket Beach. The Otis-Winbury wedding promises to be an event to remember: the groom’s wealthy parents have spared no expense to host a lavish ceremony at their oceanfront estate. But tragedy strikes and a body is discovered in Nantucket Harbor just hours before the ceremony…and everyone in the wedding party is suddenly a suspect. Request today!

What You Don’t Know about Charlie Outlaw by Leah Stewart  After a series of missteps in the face of his newfound fame, actor Charlie Outlaw flees to a remote island in search of anonymity and a chance to reevaluate his recent breakup with his girlfriend, actress Josie Lamar. But soon after his arrival on the peaceful island, his solitary hike into the jungle takes him into danger he never anticipated. Request today!

Where’d You Go, Bernadette by Maria Semple  When her notorious, hilarious, volatile, talented, troubled, and agoraphobic mother goes missing, teenage Bee begins a boat trip that takes her to the ends of the earth to find her. Request today!

The Swimmers by Julie Otsuka  From the award winning author of “The Buddha in the Attic” and “When the Emperor Was Divine,” a tour de force of economy, precision, and emotional power about what happens to a group of obsessed recreational swimmers when a crack appears at the bottom of their local pool. Request today!

HOW TO TRACK YOUR SUMMER READING: Log your reading and activities to collect badges and prizes by downloading the Beanstack App or click here

The library has added a new GALE database: Peterson's Test and Career Prep! Get started…