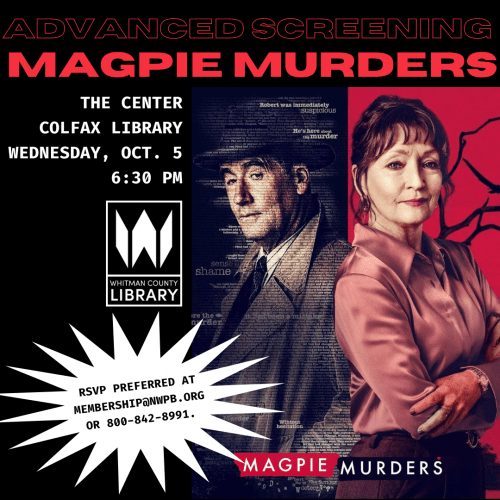 Northwest Public Broadcasting (NWPB) and Whitman County Library are thrilled to announce an advance screening of PBS Masterpiece’s Magpie Murders will be held at The Center in Colfax, Wednesday, October 5 at 6:30 p.m.

Magpie Murders stars Lesley Manville (Mrs. Harries Goes to Paris, The Crown) as Susan Ryeland, the editor of murder mystery author Alan Conway’s novels. Upon turning in his last manuscript, Conway is discovered dead soon after, just as Susan realizes the last chapter from the manuscript is missing. As Susan digs deeper, her investigation begins to eerily parallel that of the manuscript’s fictional sleuth Atticus Pünd, played by Tim McMullan (Patrick Melrose, Foyle’s War). With a host of suspects, secret agendas, and a dark twist, Magpie Murders is a double mystery and the perfect cozy thriller for fall.

The advance screening event is free to the public. Light appetizers and giveaways will be provided. Registration is not required, but strongly encouraged. Email membership@nwpb.org or call 800-842-8991 to register.

Magpie Murders is a six-part series adaptation of the 2016 novel by author Anthony Horowitz. The series will air Tuesday at 7:00 p.m. on NWPB beginning November 15. PBS Passport members can skip the wait and get all six episodes at once starting October 16 by going to watch.nwpb.org.

NWPB is a joint licensee NPR and PBS member station, and a community service of the Edward R. Murrow College of Communication. NWPB reaches more than 3.6 million people throughout Washington and parts of Oregon, Idaho, and British Columbia.