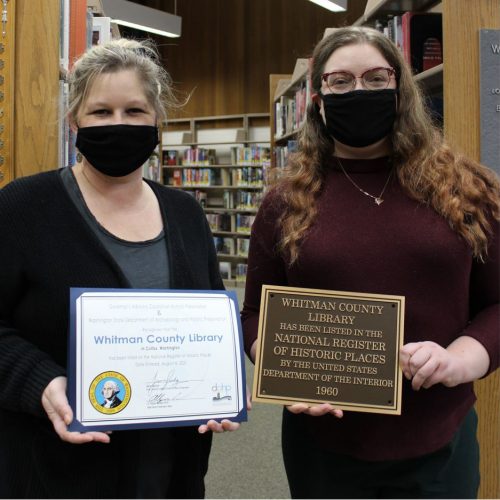 The Whitman County Library building, a Main Street fixture in downtown Colfax, has been listed on the National Register of Historic Places, where it joins other properties such as the Perkins House and the Colfax Post Office. As a public institution, the nominated building is integral to the intellectual and social development of the citizens of Whitman County and the community of Colfax. Completed in 1960 the library building was designed to serve as the district headquarters, a function that still remains to this day.

Spokane master architect Warren C. Heylman was hired to design the library. His unusual designs pushed the architectural envelop in the Inland Northwest during the post war period. Many of his projects established Heylman as one of the region’s most prominent architects during that time.

Also noted for his work on the Spokane Parkade and the Spokane Regional Health District building, the Colfax Library is an example of Heylman’s early work and his first project to be listed on the National Register of Historic Places.

A bronze plaque announcing the Register listing will be placed at the library’s front entrance.