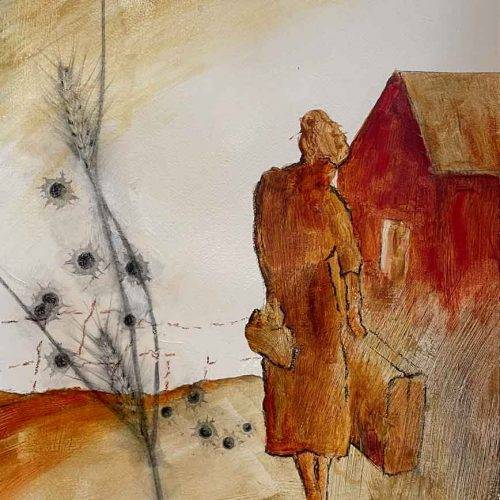 The Libey Gallery’s new exhibit by local painter Nancy Rothwell is entitled “Chaos in Ukraine”. Inspired by an interview on the news of a Ukrainian farmer in the midst of war. The journalist asked the farmer clad in his work overalls, “Why are all your cows inside the barn on such a nice day?” The farmer responded that it was too dangerous to let them out to graze. The cows could easily break a leg in one of the many potholes caused by recent bombs. This farmer stayed behind as neighbors left, so he could continue to provide grains, produce, and meat to his community. He remained on the farm because of a deep sense of obligation to his neighbors and animals.

For years, Nancy has been well known for her social and political artistic statements. Usually her work focuses on healthcare policy in the US but lately she has been reflecting on the impact of war on families and farms. “Using visual symbols, I wanted to capture two things: the chaos of war yet a symbol for a home or farm prior to war. The production of wheat in Ukraine was a major motivation for me since I identify with wheat farmers on the Palouse”.

Nancy’s acrylic collage exhibit will be on display now through the end of the year. The Libey Gallery adjacent to the Colfax Library is open Monday-Friday 10:00 am to 6 pm and Saturday 1:00-5:00 pm.

Blind Date with a Book at Colfax Library

Are you looking to find the book of your dreams this Valentine’s season? Colfax Library…

WCL Board of Trustees Update

Cindy Alred of Palouse was recently appointed to the Whitman County Library Board of Trustees.…

Events
Recent News
Categories
Copyright 2010-2023. Whitman County Library - All Rights Reserved. This institution is an equal opportunity provider and employer.
Back To Top